Don't give up on your poor cabling jobs

One thing that I neglected to ask during my interview at $newJob was for a tour of their datacenter. I had asked a ton of questions about procedure, team structure, political divisions, etc and everything sounded great. I figured they really had their ducks in a row, the datacenter must be tip top too and let it slide. If I had taken a tour I probably would have declined the offer, but I'm glad that I didn't! This is a picture of the core switch (a Catalyst 6513) and the patch panels for our servers and 4th floor data drops: 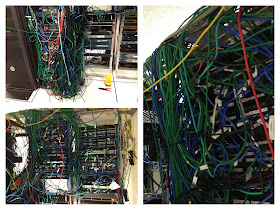 That picture was taken in July. Since then, I've been part of a project that's migrated the core to a Nexus 7k and moved all of the workstation data lines to a separate stack of Catalyst 3750Gs with a Catalyst 3560 24-PoE powering access points and phones that don't have power available.

It was a very frustrating project for me to work on, because I felt like I was cleaning up a mess that I didn't make. My flex hours had turned into being up at 5am to catch the early train. I was hired to be an AD and vSphere specialist, and here I am running cable, coordinating switch cutovers and that sort of thing. It actually turned out to be one of the more rewarding things I've ever done, because of how thrilled my coworkers are with how it turned out. 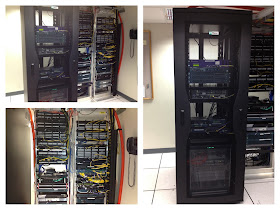 The first thing that helped was putting the Cat 3750 stack in the same rack as the patch panels that they were patching into. No more up-and-over for client connectivity. This eliminated the majority of the mess that you see hanging over the ladder in the first pictures.

The second most important thing was the Panduit rack that we got for the Nexus. I have never ever seen a more spacious rack in my life. This thing is absolutely worth every dollar. There are at least 8 inches on either side, plus built-in vertical cable management the entire height of the rack. There are 3 punch-outs on the top of the rack on each side, making cables that have to go out the top easy to route. Probably the coolest thing about it is that the door can open on either side. Definitely a plus when doing the initial migration. We ended up putting some ASAs, a WLC, a VXR7200, a Packeteer, an ACS appliance, and three Cisco NAC appliances in the same rack and there's absolutely plenty of room to add more and still have premium cable management.

Remember, when you have a cabling problem, don't be scared! If you tackle it one cable at a time, eventually it'll look like what I ended up with!
Mark at Monday, September 17, 2012
Share